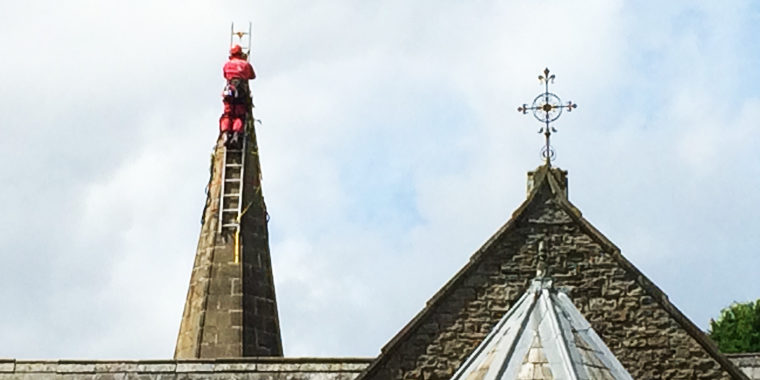 How do you remove the top three courses of a church spire while still hanging from it on a rope?
Isn’t that like…cutting the branch your sitting on?
Well… It could easily be, if you don’t have the right system in place…

Over the past 6 months, WallWalkers have had the pleasure of working on a dinky little church in the Forest of Dean, perched on a hillside overlooking rolling horizons and broccoli-top tree beds.
The contract was comprised of 5 distinct aspects:

1: Remove the exploding iron rod from the spire’s top, replace all fractured and damaged stone with new
2: Install a new internal oak floor at the top of the church tower, where the base of the pyramidal spire meets the top of the rectangular tower
3: Fit a stainless steel rod from the spire peak, down internally through to the spire floor and tighten so the spire compresses on to the supporting tower below
4: Point loose and failing joints of the spire and tower which are allowing water to ingress
5: Fit bird/moisture meshing to the sound openings to inhibit bird access and hamper the rate of rust occurring on the iron bell frames

The initial work carried out was to analyse the mortar currently in place on the church. Following this, the WallWalkers then created 4 biscuits of their findings with slight variations to each, chopping out a square meter of an enclosed area of wall for the architect to consider. Once this decision had been made, it was on to phase two.

This was executed very carefully, not only due to the large 40KG section of stone hovering above the church nave roof, or the narrow pathway below which was cordoned off and manned throughout to ensure no unauthorised entry occurred, but also because the section of stone the team were removing was in fact to be used as a template for the new section to be made up to reflect. Using rope access systems to lower the stone easily and smoothly in manageable sections ensured they all reached the ground safely and fully in tact. With the top three courses lowered and the badly degraded iron rod removed from the spire – see ‘Excalibur-esque’ photo below – the team then set about installing the mesh in the sound openings.

This specific mesh is one we rarely see used, though we’ve had wonderful results with it in the past. The sound openings allow sound to travel when the bells ring; air to flow throughout the tower to promote a fresh and dry environment; while the louvres (downward facing angular sections between the sound openings) prevent driving rain from entering the tower and damaging its internal fabric.

However, the moisture in the air is a lot harder to control that the rain (how does one ‘direct’ moisture?), which can itself form a layer of water on the bells, bell frames and internal tower structure, effectively proving just as damaging as the rain itself when given enough time.

Rather than installing an impenetrable sheet, which prevents the sound from travelling and creates a stifled, dense atmosphere – something we’ve seen all too many times over the years while clambering around bell towers – this mesh is a stainless steel gauze-like material which is flexible, thin and porous to allow air and sound to move between it, yet strong enough to prevent bird entry from pesky jackdaws and blackbirds looking to roost.

Accessing the top of the bell chamber was a daily struggle, resembling both a caver squidging and squadging between a rock and a hard place, and that scene from Ace Ventura where he crawls out of a robotic rhino’s behind, gasping for air in the mid-summer’s heat. The photo of the WallWalkers technician maneuvering his way through the bells and beams will explain this mission better than words.

The big day arrives – the new spire stone has been made and is now on site. The team rustle their things together and the site supervisor briefs them at the base of the tower in preparation for the following task, which is to go smoothly and seamlessly because “all bases are covered” (a WallWalkers catchphrase, it seems).

Ladders were installed at the peak of the spire and the stone sections bagged ready for hauling. Using a 3-1 system made light work of the weight itself, with a separate groundsman pulling the stone bag away from the spire to protect the stonework. While on the spire, the team noticed group of deer gathering in the graveyard below, grazing and basking in the sun. A moment of appreciation, a quick snap of a camera and suddenly they’re back to the dirty work. The stone was installed without fuss and the new, shiny stainless steel rod was hauled in to line to replace the rusted heap that made up the original ironwork.

The final stage of the spire rebuild was near. Energy was high and the team were very excited. Scurrying up the internal bell chamber, resembling a group of squirrels chasing each other up a tree trunk, the WallWalkers attached the stainless steel rod to the underside of the oak floor, through their newly installed rectangular hollow steel beam, which would grip to the frame of the resin fixed floor above it when lifted. The rod was then tensioned in place; in turn compressing the top of the spire down in to the tower, unifying the structure and creating much greater stability.

With the church spire now compressed, the team had only the tower and spire pointing to go. They rigged their ropes and raked out and all areas suffering the greatest degradation. The architect specified a mix comprised of 2 parts Warmwell yellow sand, 0.5 parts Hillhead red sand, 0.5 parts 0-4mm stone dust and 1 parts NHL 3.5 lime, creating a creamy pink colour tone with bits of stone in which would bind the mortar as a reinforcing aggregate.

Lime mortar pointing is a very unique skill which can only be developed from experience and education. The team are well versed in lime mortar pointing on historic buildings, incorporating their understanding of flaunching, multiple-layering (so to ensure it compact and dries solidly throughout) and working the mortar so the finish matches that of the original work once dry.

Completing this final stage of the project, they opted to solve a few extra issues while the rope access equipment was still rigged in place, such as bird proofing a roof vault due to a rotten soffit board, repairing some failed lead caping of a hopper, renewing failed lead flashing along a rooftop edge and clearing the gutters of who-knows-what, which had amassed over many years.

All in all, the project was a great success and one WallWalkers will always look back on fondly. The enjoyment of seeing each aspect coming to fruition, the sense of progression and teamwork that developed over the many months of hard work and the joy of seeing the new stone sitting so proudly on the church spire top as we drove away for the final time reminds us why we all love doing what we do best.

I’m just glad we finished before Christmas. I can safely say that with a couple of mince pies too many, what would’ve climbed up through the tower certainly wouldn’t have made it down!

The MillWalkers – Dismantling the Sweeps of a Beautiful Windmill
July 16, 2018

Brushing up on The Royal Academy of Arts
November 16, 2017